White-collar crime in Texas is endemic and takes many forms. It can include public officials or people involved in private corporations.

Here are five common types of white-collar crime in Texas.

Embezzlement charges may be brought against a wide range of people from the lowest employee on the rung to a company director who dips into the firm’s business accounts.

It’s defined as theft, or misappropriation of personal property that’s placed in one’s trust or belonging to one’s employer.

Typically, embezzlement involves the mishandling or abuse of funds. You don’t have to keep the money to be charged with embezzlement. You may transfer it to another entity such as a third party. 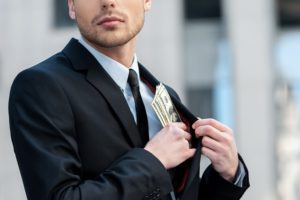 Embezzlement typically carries a high sentence. We recently noted how the former chief financial officer of a lumber company in Killeen was sentenced to 10 years for embezzlement.

This form of white-collar crime can include situations when parties intentionally file false or incomplete forms, bribe a trustee appointed by a court or debtors conceal assets so as they don’t have to give them up. Use of false information or filing several times for bankruptcy in various states can also constitute bankruptcy fraud.

The investigation of healthcare fraud has been one of the biggest growth areas in recent years.

Practitioner fraud can include billing for care that was not given or needed, obtaining fully-covered or subsidized medicines that are unnecessary to sell them for profit on the black market, or the filing of more than one claim for the same service.

Members of the public are charged with healthcare fraud for forging prescription drugs or using false information and another person’s insurance card to obtain medication.

Some massive healthcare fraud operations have been uncovered in Texas, we note on our blog.

You may face bribery charges if you offer an item of value to someone who holds a legal or public duty. In October, Attorney General Ken Paxton was also hit with bribery charges. He was accused of receiving a six-figure gift from a CEO whose company was being investigated by the State of Texas for fraud, according to the Dallas Morning News.

Corporate fraud is a leading target of the FBI. It can damage investor confidence and hit the U.S. economy negatively.

The FBI has pursued some major accounting schemes for the purpose of deceiving auditors, analysts, and investors about a business’s or corporation’s true financial condition. The collapse and subsequent investigation into Enron is a prime example.

Businesses may artificially inflate their performance by manipulating factors like share prices, financial data, or other corporate valuations.

If you have been charged with a white-collar crime, please call our Fort Worth criminal defense lawyers for a free consultation today.