It’s not a crime to be homeless in Texas. However, a raft of laws targeted at homeless people means people with no roof over their heads are often criminalized. Some Texas cities rigorously impose laws against the homeless and have made national headlines for their uncompromising approach.

A recent report on CBS noted how cities in North Texas and other parts of the United States are targeting homeless people via a raft of laws that prevent people living in vehicles, camping in public and panhandling. 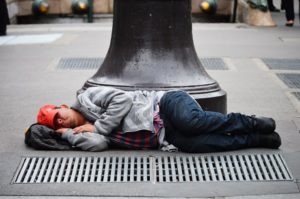 Homeless People Are Targeted in Texas

The National Law Center on Homelessness and Poverty, an organization that works to prevent people losing their homes, published a list of some of the cities which criminalize aspects of homelessness.

Dallas was one of the cities on the list. In 2016, Dallas Mayor Mike Rawlings’ Commission on Homelessness came under fire from critics at a public meeting.

Public sleeping has been illegal in Dallas since the early 1990s. Faced with a rapidly increasing homelessness issue the city created a raft of new laws and setting curfews for its public parks.

Acts like rummaging through trash, panhandling, and drinking alcohol in public became offenses as the city took a harsh approach towards its homeless population.

The city aggressively broke up homeless encampments. In 1994, it bulldozed an encampment of several hundred tents beneath the freeway separating downtown from Deep Ellum, reported the Observer.

However, a federal judge issued an injunction against the city from enforcing its controversial sleeping in public ordinance.

The judge alluded to the lack of shelter beds and the rules attached to them, arguing the city was effectively making it a crime to be homeless. Dallas made a list of the 20 meanest cities in the country in terms of homelessness policies.

The crackdown has continued in the years since. From 2012 to 2015, Dallas police ticketed more than 11,000 people who were accused of sleeping in public, the Observer noted. Usually, these people lack the resources to pay fine and may drift in and out of incarceration.

If you have been charged with a homelessness in Texas, you may have legal recourse to fight the charges. Call the Medlin Law Firm today for a free consultation.