Homelessness is a growing problem in many cities across the United States. Often ‘get tough’ policies that criminalize it can only make the issue worse.

Some cities in Texas appear in a national list of places with the harshest homelessness enforcement laws.

The National Coalition for the Homeless published a report related to the criminalization of homelessness in 2007. 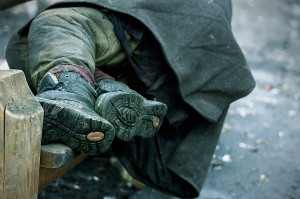 A list of the 20 “meanest cities” for homelessness contained Dallas at number six and Houston in seventh place.

Dallas has also accused over its harsh homelessness laws by the National Law Center on Homelessness and Poverty.

Between 2012 and 2015, for example, police in Dallas ticketed more than 11,000 people who were accused of sleeping in public, reported the Dallas Observer. The offense carries a $146 fine. It goes without saying that if you are sleeping rough you are unlikely to afford to pay the fine. The Observer article said many of the city’s homeless owe thousands of dollars in fines they cannot pay.

Dallas made sleeping in public illegal in Dallas back in the early 1990s. The city couched the laws in terms of  “quality of life” ordinances. Curfews were imposed in city parks and it became illegal to panhandle and rummage through trash cans.

In 1994, the city bulldozed an encampment of hundreds of tents under the freeway separating downtown from Deep Ellum.

A CBS report in 2016 pointed out how cities in northern Texas were enacting further bans on panhandling, living in vehicles and camping in public.

The Observer mused Dallas’ beefed up law to stop panhandlers was on constitutionally dangerous ground, pointing out free speech is protected under the First Amendment.

If you have been charged with a homelessness offense, there are likely to be many gray areas and defenses may be available.