The case of Rosa Maria Ortega made headlines beyond Texas. Ortega was sentenced to eight years in prison earlier this year. But her crime was not one involving violence. She was convicted of illegally voting.

Ortega voted for Republican Ken Paxton for Texas attorney general three years ago in 2014. Now, according to the Star-Telegram, she’s devastated that Paxton appears to have used her case to send out a message about illegal voting.

Paxton said in February Ortega’s case shows how serious the State of Texas is about “keeping its elections secure.”
Ortega, is a 23-year-old permanent resident. She arrived in Texas when she was a child. Her four children are all U.S. citizens. 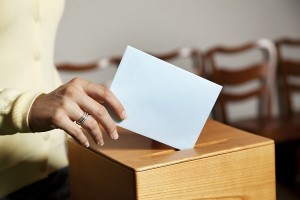 She was charged with two counts of illegal voting in elections in 2012 and 2014.  A jury in Tarrant County sentenced her to eight years in prison and a fine of $5,000 for each count of illegal voting. After serving her sentence, she is likely to be deported.

Ortega has been released from jail pending an appeal, according to her attorney.

As a permanent resident, she was not entitled to vote. However, the severity of the sentence shocked some commentators. The New York Times noted examples of voter fraud have been hard to find, despite claims of widespread abuse of the system by politicians. It said this might explain the unusually harsh sentence handed out to Ortega.

She said she thought she was doing something correct for her country, according to the Star-Telegram. Ortega said.

“When they gave me the sentence they just broke my heart, and they didn’t just break my heart, but I already knew my family was going to be broken, my kids especially,”

Ortega says she never thought she couldn’t vote because she’s a green card holder. Ortega received a voter card in Dallas County after providing a valid driver’s license and Social Security card. She was approved via the state process, according to Toni Pippins-Poole, the Dallas County elections administrator.

When she moved to Tarrant County, she registered to vote again. This time, her attempt to vote was rejected because she checked the box stating she is a non-citizen. She told Tarrant County election officials she voted in Dallas County. She received another application. On this occasion, she marked the box and incorrectly said she was a citizen. She was arrested for voter fraud soon afterward.

Paxton’s office prosecuted the case along with the Tarrant County district attorney’s office. The attorney general said the case demonstrated how serious Texas is in keeping its elections secure.

Ortega maintains she was punished for making a mistake and didn’t think she was doing anything wrong.

At the Medlin Law Firm, we represent many people who are charged with serious offenses in the Fort Worth area. Often people make key mistakes when they are arrested. An experienced Texas criminal defense attorney can advise you on how to avoid these mistakes. Call us at (682) 204-4066.