The double jeopardy rule means once a jury has rejected the facts that would be necessary to convict you of an offense you can’t stand trial again in a case where a different jury may reach another factual decision.

However, the U.S. Supreme Court has decided the double jeopardy rule does not apply in the same way when a decision is vacated as being unconstitutional.

The case in question was Bravo-Fernandez v United States. It came before the Supreme Court in October. 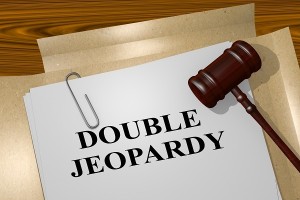 The court looked at whether the fact that a decision was vacated as unconstitutional prevents that case’s acquittal from barring further prosecution on issues already decided in the defendant’s favor.

The case involved an alleged series of white collar crimes. In May 2005, Juan Bravo-Fernandez, the president of a Puerto Rico private security company, along with Senate member Hector Martinez-Maldonado, went to Las Vegas to see a boxing match.

Both men were indicted on charges that the private security boss financed the trip because he wanted Martinez-Maldonado to support legislation beneficial to the security firm. The men were indicted on violations of the federal bribery statute, conspiracy, and the Travel Act which makes interstate commerce for a criminal purpose unlawful.

The courts decided the jury had been improperly instructed about what the government needed to prove in the case. The appellate court remanded the case.

When the district court denied this motion, lawyers for Bravo-Fernandez and Martinez-Maldonado sought an acquittal. They said the original acquittals for the Travel Act and conspiracy offenses meant the government could not bring back the bribery charges.

A jury had already determined that the government failed to prove a conviction under the bribery statute, they stated. The arguments that the Double Jeopardy Clause prohibited the issues returning to court was denied by district court, the appellate court affirmed. The case ended up in the Supreme Court.

The Supreme Court rejected the double jeopardy argument. The justices said the clause does not prevent the government from retrying the two defendants after the jury returned an irreconcilably inconsistent verdict of convictions and acquittals that were vacated based on a different legal error.

Justice Ruth Bader Ginsburg said a retrial would not be possible if the U.S. Court of Appeals for the First Circuit vacated the convictions.

Neither of these were factors in the case. The vacated judgment was due to a legal error and the petitioners could be retried, the court ruled.

If you have been the subject of a miscarriage of justice, you may have grounds to appeal the decision of a court. Contact our Tarrant County criminal defense attorney here.