Road rage in Fort Worth is a major issue that has been linked to car accidents, shootings and fatal crashes.

The accident left one officer hospitalized while another was treated for injuries but released from a local hospital soon afterward. The officers were injured when their patrol car crashed during the pursuit of a road rage suspect, according to police. 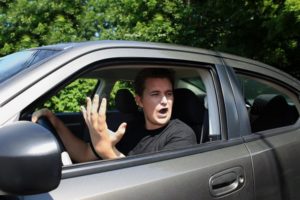 Road Rage in Fort Worth is a Problem

Police said shortly after the crash involving the officers, Anderson also wrecked his vehicle. He was taken into custody when officers found him hiding in a nearby home.

The pursuit began when officers answered a call of a road rage incident involving a man brandishing a gun at Hulen Street and Interstate 20.

The caller on I-20 called dispatch to say another motorist pulled up, displayed a handgun and then pointed the gun, police said.

The suspect fled the scene, according to police reports. Anderson was held in the Fort Worth Jail facing charges of aggravated assault with a deadly weapon, unlawful possession of a firearm and evading arrest. He also had seven outstanding warrants, jail records.

Police also arrested Zadrien Daniels, 21, a passenger in Anderson’s vehicle. They said Daniels jumped out of the car during the chase. She faces a charge of marijuana possession. She had five outstanding warrants at the time of her arrest, jail records stated.
On occasions, road rage incidents can turn tragic. Police said a road rage incident in May was the catalyst for a fatal shooting in Richardson, according to the Richardson Police Department.

The Star-Telegram reported officers shut down the U.S. 75 southbound between Campbell Road and Belt Line Road to investigate the fatal shooting.

The term road rage is used to describe a group of different offenses in Texas. If you have been charged with a crime of this nature, please call our Texas criminal defense lawyers as soon as possible.