Las Vegas Trail in Fort Worth has an unenviable reputation as an overlooked road frequented by crime, poverty, and prostitution.

The stretch of pavement close to the one-mile corridor south of Interstate 30 is frequented by pimps, prostitutes, homeless people, and families mired in poverty reported WFAA.

Now after years of complaints, the city is setting up a task force. The TV station spoke to Amanda Oliver who lives in a tent on Las Vegas Trail.

She has lived on Las Vegas Trail for 30 years and said it has always been notorious for crime with people being robbed and shot on the sidewalk. 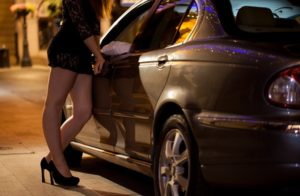 Prostitution is an issue on Las Vegas Trail

These incidents include sex crimes against children, assaults, drug crimes, and criminal mischief. Local people have pushed for change.

In the wake of a series of Fort Worth Star-Telegram articles highlighting the consequences of years of neglect, the city is to devote a task force to Las Vegas Trail.

An editorial in the Star-Telegram pulled a few punches. It described the trail as:

“A multiracial mashup of poverty personified — a perpetual cycle of violence, substance abuse, unemployment and underemployment begetting anger, frustration, hopelessness and a generational disorder of absentee parents and children left to raise themselves and one another.”

Over the summer, the task force kicked off with a community forum hosted by the Star-Telegram. More than 250 people packed into Western Hills Primary School.

Police said they are working on new programs including hundreds of security cameras.

However, Lt. Kirk Driver of Fort Worth police was quick to point out a lot of changes need to happen outside the remit of the police department.

He said lot of things can be solved by preventative policing outside of the police department to stop crimes before they occur.

If you are charged with crimes like prostitution, sex offenses, or violence, you should consider hiring a Fort Worth criminal defense lawyer.