Healthcare fraud has been a major expansion area for federal prosecutors in the United States in recent years and the dragnet has often closed in on Texas.

We have noted some massive healthcare fraud cases in Texas in recent years.

For example, last year Dr. Jacques Roy, 58, of Rockwall, Texas, was convicted of fraud after prosecutors accused him of “selling his signature” to facilitate almost $375 million in false claims to Medicaid and Medicare. The scheme was described by the feds as the largest home health care fraud case in the history of both programs.

The case of the Forest Park Medical Center in Dallas made headlines earlier this year.

Richard Toussaint, MD, the joint founder of the physician-owned center, has pleaded guilty in February to conspiracy to pay and receive health care kickbacks along with a count of commercial bribery, reported D Magazine. 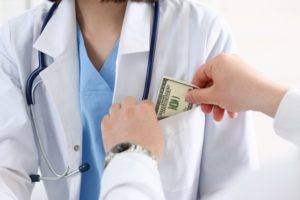 Healthcare fraud is under fire in Texas

Dr. Toussaint was one of 21 defendants charged with health care fraud in a federal indictment last year.

The feds alleged the medical staff were taking part in a bribery and kickback scheme that involved paying surgeons, lawyers and other parties who referred patients to Forest Park Medical Center’s facilities.

Medical professionals and others involved in this scheme allegedly paid and/or received $40 million in bribes and kickbacks for referring patients. The fraud allegedly netted $500 million in patient charges and the now-defunct medical center collected more than $200 million.

Dr. Toussaint reportedly took part in a plea bargain and agreed to plead guilty in exchange for a prison sentence of under 10 years.

Faced with rising numbers of deaths across the United States, Sessions, announced the creation of a new “Opioid Fraud and Abuse Detection Unit.”

The unit will seek to identify medical professionals who are allegedly overprescribing opiates and target them with possible charges.

In July, the U.S Department of Justice announced charges against 412 people accused of taking part in healthcare frauds and opioid-related crimes that cost taxpayers approximately $1.3 billion.

The arrests were part of what the department said was the largest healthcare fraud takedown in the history of the United States. Those arrested included 120 doctors as well as other individuals who were charged prescribing and distributing opioid painkillers.

If you are charged with health care fraud, it’s important to hire an experienced Tarrant County criminal defense lawyer.