Hate Crimes May be Surging in Texas

Some pressure groups claim Texas has a longstanding problem with hate crimes. These kinds of offenses may have spiked in the wake of November’s presidential elections.

The Southern Poverty Law Center claims Texas has 84 active hate groups – more than any other state in the country.

Claims that hate crimes increased after the election of Donald Trump to the presidency are often anecdotal but some trends have been identified.

The New York Times noted an upsurge in hate crimes in the Big Apple after Trump’s election. 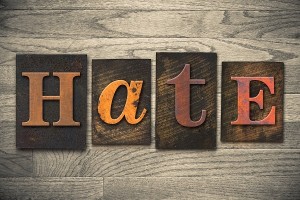 It reported 43 hate crimes between the time of the election and Dec. 5, 2016.  While many of the incidents involved graffiti, there was also an instance of a man threatening two Arab women with a pit bull and telling them to go home.

A report in USA Today stated the upsurge in hate crimes since the election has been more dramatic than the spike recorded after the 9/11 terrorist attacks.

Richard Cohen, President of the Southern Poverty Law Center, said there has been a large uptick in threats, vandalism, and intimidation spurred by the rhetoric around Trump’s election victory.

The SPLC logged more than 200 complaints in just over a week after the election. It made comparisons with the Jim Crow era.

Some of those incidents involved black children being told to get to the back of a bus and Latino children receiving taunts about the wall that Trump has promised to build between the United States and Mexico, the SPLC claimed.

It remains to be seen how many of these incidents end up with charges being filed. In Texas, very few hate crime convictions are secured and many are dropped or replaced with lesser charges.

Prosecutors earned convictions in just a handful of cases since Texas enacted a hate crimes law in 2001.

However, the remit of hates crimes is about to be extended in Texas with a move by Governor Greg Abbott to make offenses against police officers a hate crime. Legislation will come before lawmakers in the new session.

If you have been charged with a hate crime you could face a stiff sentence in the current climate. Call our Tarrant County hate crimes attorney today for powerful representation at (682) 204-4066.