Serious charges against law enforcement officers invariably make headlines. In Houston, a Texas sheriff’s deputy and her husband were recently indicted on murder charges in the alleged restraining death of a man during a late night confrontation.

The incident occurred outside a restaurant in the Houston area, according to reports.

A report on ABC7 stated a Harris County grand jury sitting in Houston returned the murder indictment against Harris County deputy Shauna Thompson as well as her husband, Terry Thompson.

They are accused of causing the death of 24-year-old John Hernandez. District Attorney Kim Ogg said both were allowed to turn themselves in. They declined to testify before a grand jury. 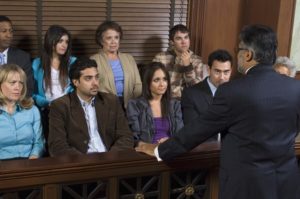 The confrontation occurred on May 28 outside a Denny’s restaurant in Sheldon, according to reports. Hernandez died three days after the confrontation.

Harris County Sheriff Ed Gonzalez appeared at the announcement with the district attorney over the restraining death. The official told the media that Shauna Thompson has been cooperative with the sheriff’s office’s administrative investigation.

Police investigators accuse Shauna Thompson of helping her husband to restrain Hernandez who was reported to be drunk and urinating outside a restaurant.

Evidence from a medical examiner found Hernandez died from depletion of oxygen to his brain caused by chest compression and strangulation.

Cellphone video evidence released by an unidentified bystander showed a man lying on top of Hernandez. An attorney for the bystander said the man restraining Hernandez used an illegal chokehold.

Thompson was placed on administrative leave by the sheriff’s office. Gonzalez requested the help of the U.S. Department of Justice and the Texas Rangers in the investigation.

Alleged killings by law enforcement officers have made headlines in recent years. A Minneapolis police officer shot dead Justine Damond, an Australian woman who called for police assistance after hearing a sound in an alley near the home she shared with her fiancé.

The death led to renewed scrutiny of police officers in the Twin Cities area for their use of deadly force, reported The Washington Post.

Also in July in San Antonio in Texas, a police officer responding to a call claiming a man was threatening to kill a 15-year-old girl fatally shot the suspect.

Despite a national outcry over police officer killings, Attorney General Jeff Sessions is considering moves to give police greater powers.

If you have been arrested by a police officer and are concerned about the process used, please contact our Tarrant County criminal defense lawyers today.