Crystal City in Texas was branded one of the most corrupt places in the Lone Star State. Earlier this year, its former mayor and attorney were convicted of corruption charges.

Some of the counts they were indicted on carry a prison sentence of up to 20 years each, according to an announcement from the U.S. Department of Justice. Jonas was convicted on all 14 counts facing him. Lopez was found guilty on all seven counts.

Lopez and Jonas, who also served as city manager, were charged with bribery, wire fraud and conspiracy after a jury deliberated for four hours.

Lopez and Jonas were taken into custody by federal marshals minutes after the jury handed down its verdict. They will be detained until a future sentencing date, which had not been set at the time.

Present Crystal City Mayor Frank Moreno took office in May 2016 after the scandal. Jonas and Lopez were indicted just three months earlier along with a businessman and several members of the city council who were accused of soliciting bribes. 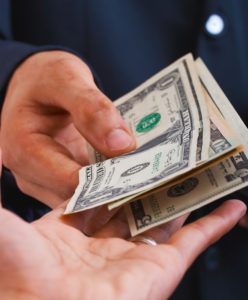 The other council members and the businessman pleaded guilty previously.

Their trial was held in June. Prosecutors presented audio from recordings made by informants who taped Lopez and Jonas soliciting bribes. The defense did not put any witnesses on the stand.

Crystal City is in Zavala County, Texas. Its population was 7,138 at the time of the 2010 census.

The FBI swooped on the small city in early 2016. The feds arrested five top officials in the Texas city. They were accused of taking tens of thousands of dollars in bribes and being in cahoots with the operator of an illegal gambling operation who went by the nickname “Mr. T.”

The federal indictment included the mayor, mayor pro tempore and a council member. The others arrested were the city manager, a former city council member and Ngoc Tri Nguyen, an alleged gambling operator.

Another member of the city council Marco Rodriguez was arrested on human smuggling charges. The TV station KENS reported Rodriguez confessed to being hired to drive undocumented immigrants across the Mexican border.

The city was in the grips of a severe financial crisis at the time of the offenses.

A report in the Washington Post noted Crystal City was $2 million in debt and facing bankruptcy at the time of the offenses.

Richard Durbin Jr., the U.S. attorney for San Antonio, said he hoped the high-profile indictment would help restore a degree of public confidence in the discredited local government.

While the officials face considerable time in jail and fines up to $250,000, the federal authorities did not have the power to remove officials from office. Only electors have that power.

Earlier this year, Dallas County Commissioner John Wiley Price was found not guilty by a jury of corruption charges. He faced charges of bribery, fraud and income tax evasion.

If you have been charged with complicated local government corruption crimes, it’s important to get seasoned criminal defense representation. Call our Tarrant County criminal defense lawyers or a free consultation about your case.