Why Domestic Abusers Can’t Own Guns

A mass shooting in Texas last year highlighted the law that spells out why domestic abusers are banned from owning or possessing guns as well as its major loopholes.

Kelley should not have been allowed to buy guns. He was convicted in a military court of domestic violence. Many mass shooters have a history of abuse and violence toward women and family members. In most cases, they found it easy to own guns.

In the same month as the Texas shootings, a domestic abuser in California shot and killed five people including his wife.

A report on WTOP noted underreporting of domestic violence was just one problem that’s putting guns in the hands of abusers. 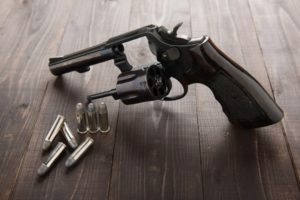 A study from the gun-safety group Everytown for Gun Safety found a staggering 54 percent of mass shootings were related to domestic violence.

Kelley, 26, has been previously convicted by a general court-martial on two charges of domestic assault while he was in the air force. He was dishonorably discharged.

Due to his domestic assault conviction, he should not have been allowed to buy or own a gun.

The Lautenberg Amendment enacted in 1996 to amend the Gun Control Act of 1968 establishes a regulatory framework to prevent the use of firearms in domestic violence offenses.

The 1968 act prohibits anyone convicted of a felony and anyone subject to a domestic violence protective order from possessing a firearm. However, the Lautenberg Amendment covers misdemeanors. The U.S. Supreme Court upheld the ban on domestic abusers owning or possessing firearms as recently as 2016.

The Air Force subsequently launched its own internal review into why it failed to pass on important information to the FBI that should have prevented Kelley from purchasing firearms, reported the Washington Post.

The issue related to branches of the military failing to pass on information about domestic violence may be more widespread than feared.

The Giffords Law Center to Prevent Gun Violence reported it reviewed numerous military documents concerning the compliance with the Lautenberg Amendment. It said it had not identified a procedure by the Air Force for reporting domestic violence convictions to the FBI.

Even in Texas which has liberal gun laws, you may be charged with a firearms crime. If you or a family member has been charged with a gun crime, call our experienced Tarrant County criminal defense lawyers today.