Clown threats have made headlines across the country in recent weeks with arrests in Texas and elsewhere.

While schools have been thrown into a state of panic and stepped up security, the clown threats are often vague and it’s questionable whether they necessarily constitute criminality.

The TV station KXAN reported on the arrest of an 18-year-old in Manor. Residents claimed a masked clown knocked on doors. 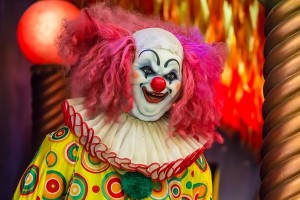 clown threats are no joke in Texas

The 18-year-old had a clown mask with him but told police the whole episode was a misunderstanding, according to media reports.

Police investigated other clown-related incidents involving alleged criminal activity in the city. A Manor High School student claimed a clown approached her and asked to get in her car. She called 911.

Meanwhile, the Dallas Morning News reported the arrest of a Rockwall ISD student in October. He was reported to have made a “clown threat” on social media that threatened a local middle school, police stated.

The report said a school resource officer was dispatched to Utley Middle School after the apparent threat.

Police told news channel a clown threat was made by a 13-year-old student at Utley. They claim her post included the details of students that would be potential targets of an attack.

In LaGrange in Texas, four people were charged with making terroristic threats linked to clowns.

Clown incidents caused considerable anxiety across Texas. In September, the New York Times reported on 12 arrests linked to clown hoaxes and alleged threats on social media. The figure has increased since. The threats were deemed so serious they led to the closure of schools in Reading, Ohio.

Although the clown threats have caused considerable unease, there’s always a danger that the authorities will overreact to a threat because it’s making national news headlines.

Threats on social media have been a recognized offense for some time but there is a need to balance threatening behavior with free speech under the First Amendment.

In 2014, the U.S. Supreme Court attempted to make a distinction between free speech and threatening behavior when it ruled only “true threats” on social media constitute a criminal offense.

Vague clown threats made by teens may not constitute criminality. For more information visit our Fort Worth criminal defense attorney’s website or contact us here.