Alleged crimes committed by teachers have made headlines in recent years in Texas and resulted in new legislation.

Recently, a Texas special education teacher was arrested for allegedly biting a 9-year old student who had special needs.

A report on the NBC News affiliate KXAN, stated Williams was arrested and charged with causing injury to a student. 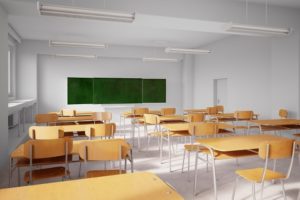 Charges in the classroom are an issue in Texas

The allegation related to a child with behavioral problems who was reported to be disruptive in class. According to an arrest warrant obtained by KXAN, Williams sought to remove the child from the classroom. During the struggle, Williams claimed the child raised her arms and made contact with the teacher’s mouth.

The affidavit suggested the teacher said she wasn’t sure if she has bitten the child and the whole incident was over very quickly.

The report said a pediatric nurse practitioner with the Child Abuse Resource and Education (CARE) Team at a local hospital said the bite was intentional.

Williams reportedly resigned from her position in April. KXAN reported the case has been referred to the Texas Education Agency’s educator investigations division.

Teachers have been in the spotlight in recent years in Texas. However, inappropriate relationships between teachers and students rather than assaults have made most of the headlines.

A report in The Statesman noted hundreds of primary and secondary teachers in the state have lost or surrendered their teaching licenses in the last seven years following investigations into improper relationships with students. More than half of them were not charged with criminal offenses.

The investigation stated the alleged misconduct is not easily accessible from the Texas Education Agency. Many school districts keep this information secret, allowing teachers to move on to other teaching jobs or jobs involving contact with children.

In May, Texas Governor Greg Abbott signed into law a measure to crack down on inappropriate student-teacher relationships.

SB 7 by Republican State Senator Paul Bettencourt of Houston requires superintendents and principals to report cases of teachers who get involved in inappropriate relationships with students. Administrators who fail to report such relationships face a state jail felony or a fine of up to $10,000 after Sept. 1.

“Texas is going to impose real and stiff consequences for any teacher who dares have any inappropriate relationship with his or her students.”

If you have been charged with an offense in the classroom, you should hire an experienced Texas criminal defense lawyer as soon as possible.