A man who was placed on the FBI’s list of 10 most-wanted fugitives after investigators said he killed two men in Milwaukee has been arrested in Texas.

A report in the New York Daily News stated 24-year-old Terry Strickland was arrested in El Paso in Texas and booked into a local jail.

He was picked up in January. Authorities said he was on the run for almost six months.

Police say Strickland was among a group of men who became involved in an argument outside a Milwaukee home on July 17. Witnesses said Strickland went inside the house, emerged with a gun and fired into the small crowd outside the home.

The report said Strickland fatally shot Maurice Brown Jr who was on the ground. He allegedly turned to Michael Allen Reed, 39, and shot him in the head. 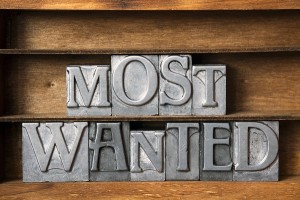 Strickland, was charged with two counts of first-degree intentional homicide and with unlawful flight to avoid prosecution.

Strickland was placed on the FBI’s list of 10 most wanted fugitives. Federal investigators accused him of carrying out cold-blooded killings.

The FBI said its agents received a tip that Strickland could be holed up in El Paso. The FBI in El Paso along with the El Paso Police Department arrested him during a traffic stop. He was taken into custody without incident.

The border area of Texas appears to be a popular place for those on the FBI’s list of most wanted fugitives to hide out.

Later in January, Robert Van Wisse, a man suspected of raping and killing a young mother on the University of Texas campus in 1983, was picked up after being on the run for decades.

Van Wisse, 51, was picked up six weeks after his name was added to the FBI’s Ten Most Wanted Fugitives list.

Austin police sought him in connection with the murder of 22-year-old Laurie Stout in September 1983, Fox 7 Austin reported.

Police said he fled to Mexico in 1996. DNA linked him to the offense, according to the FBI.

The FBI’s Most Wanted Fugitives List dates back to the 1950s. Few women have appeared on it.

However, last year Brenda Delgado, a Mexican national was added to the list. She was captured in Mexico soon afterward and arrested over the killing a pediatric dentist in Dallas.

The people who appear on the Most Wanted Fugitives List are usually accused of killings. At the Medlin Law Firm, we provide a vigorous defense for those accused of murder.