Crimes on Facebook Live – Why More Offenses Are Being Streamed

Crimes streamed on Facebook Live are becoming increasingly common. An alleged crime in Mississippi when two teenagers were arrested over the sexual and physical assault of a woman is typical.

Gulfport Police Department said Haleigh Alexis Hudson, 19, turned herself in to the police. She was charged with felony kidnapping and sexual assault.

A report in the Star-Telegram stated Ezzie Johnson, 17, was arrested by police and charged with felony kidnapping.

Police say the charges stemmed from a viral video posted on Facebook Live.

The victim was a 23-year-old woman, police said. Additional charges of abusing a vulnerable adult apply if the victim is mentally handicapped, according to police. 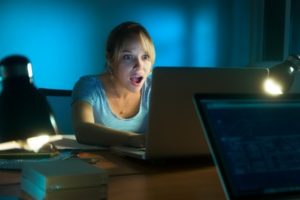 A series of cases involving crimes streamed on Facebook Live made headlines this year.

In the spring, Chicago police arrested two suspects over a brutal sexual assault of a 15-year-old girl they say the teens streamed on Facebook Live. The defendants are teenage boys, ages 14 and 15, reported NPR.

Police said as many as 40 people could have watched the alleged rapes on Facebook as the incident unfolded. Nobody reported it to the police, raising legal questions whether witnesses can be charged for not taking action.

Also in Chicago, four people were charged with a hate crime after an attack on a white man with disabilities was streamed live on Facebook.

Earlier this year, The Guardian noted how narcissistic criminals are increasingly turning to videoing their crimes, providing evidence that leads to their conviction.

Facebook Live allows users to broadcast a video directly from their smartphone to the world’s biggest social media network.

The Guardian quoted Raymond Surette, a professor of criminal justice at the University of Central Florida.

He said people who record their crimes on Facebook Live may as well go down to the police station and commit them in the lobby.

However, some criminals want to make a statement about their crimes. Surette highlights political protesters, terrorists and narcissistic criminals who carry out crimes to further their agenda or demonstrate their perceived cleverness, power or bravado.

He traces this behavior back to the 19th Century when Jack the Ripper sent letters about his brutal murders to the police and local media in the 1880s.

Obviously, filming a crime on Facebook Live will present evidence to the prosecution. You should also never post details about your charges or your ongoing case on social media. If you have been charged with a crime, please contact our Fort Worth criminal defense lawyer today.