Texas’ campus carry law that came into effect last year is controversial in some quarters. At the University of Texas in Austin, three academics filed a lawsuit in a bid to stop it.

The law allows people to carry concealed handguns in most public university buildings in Texas.

Campus carry became law last year at public universities. It is one of the most contentious crime bills signed by Texas Gov. Greg Abbott to date. It was implemented on August 1, 2016 for all state 4-year colleges and universities. On August 1, 2017, it became the law at two-year and junior colleges.

Recently, a federal judge dismissed a lawsuit filed by three University of Texas at Austin professors. They sought to overturn the state’s 2015 campus carry law. 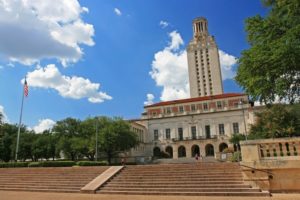 District Judge Lee Yeakel wrote in a decision that the professors, Jennifer Lynn Glass,  Mia Carter, and Lisa Moore, had failed to show any concrete evidence to substantiate their fears that the pro-gun law would have a chilling effect on free speech at the college.

The academics claimed the law violated their First Amendment rights. They said the prospect of a student carrying a gun in classrooms could make them hesitant to talk about controversial issues before the class. Yeakel said in dismissing the case that the professors didn’t have the standing to sue.

A report in the Texas Tribune noted campus carry became law in 2015. It was so controversial its implementation was delayed until Aug. 1, 2016. The law stirred up opposition among university faculty and many students. UT in Austin was the epicenter of the revolt.

However, no major incidents have been linked to campus carry to date and campus protects have all but disappeared.

“The court’s ruling is the correct outcome. The fact that a small group of professors dislike a law and speculate about a ‘chilling effect’ is hardly a valid basis to set the law aside.”

Attorneys representing the three UT professors said the judge had not addressed all of the arguments. Although Yeakel dismissed the case entirely, he only addressed the question of the First Amendment violation and ignored the academics’ other legal arguments, attorneys claimed.

Although few issues have been reported, the law has seldom been tested. There are some places in universities and colleges where guns are not allowed. While Texas has an open carry law, guns on campus must be concealed.

If you have experienced problems with this law or been arrested exercising your Second Amendment rights, call the Medlin Law Firm.