Fort Worth police morale has been a talking point for months now as violent crime surges in the city and the police come under scrutiny.

In July, the Fort Worth Police Officers Association added to the pressure on the police department when it said morale under Chief Joel Fitzgerald has hit an all-time low.

The comments were made by Sgt. Rick Van Houten and reported in the Star-Telegram.

Van Houten took an uncompromising stance with the police chief. He noted Fitzgerald has been with the police department more than two years and said the learning curve is over. He said:

“Almost two years into it, the morale is as low as I’ve ever seen it.”

However, a vote of no-confidence is unlikely to be held on the police chief anytime soon. Van Houten said such votes are an outdated idea that would create greater division. 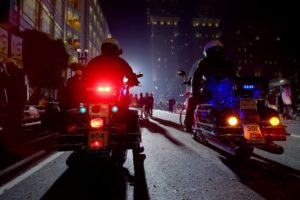 Fort Worth police morale is questioned

The Police Department declined to comment on the views expressed during the press conference. The City of Fort Worth issued a statement saying it disagreed with the comments.

The decision of the police chief to fire officer Courtney Johnson in June dominated much of the press conference.

Johnson was charged over the non-fatal shooting of Craigory Adams, a man who was brandishing a barbecue fork. The police officer said he thought Adams was holding a knife.

A charge of aggravated assault by a public servant was brought against Johnson earlier this year. It was dropped after a mistrial in May.

Van Houten said he believed the firing of Johnson was linked to a viral arrest incident last December that attracted public criticism.

A black woman was seen being controversially wrestled to the ground by a Fort Worth police officer.

Both this incident and the shooting involving a barbecue fork involved white officers and black citizens.

On the day Johnson was fired, Mayor Betsy Price and the City Council appointed a four-person task force on race and culture aimed at addressing the fallout from Adams’ arrest.

If you have been charged with a crime in Fort Worth, please contact the Medlin Law Firm today.