Of all the forensic tests used in the criminal justice system, DNA is seen as the golden standard. If a suspect’s DNA matches material found a crime scene, the chances of acquittal are usually low. But DNA has flaws too, less in the science than the way tests are carried out and matches are made.

Over the summer, the Dallas County District Attorney’s Office halted DNA testing for criminal cases after issues were found with the county crime lab’s new DNA test kits, according to media reports.

The TV station WFAA reported the problem led to dozens of cases having to be redone. 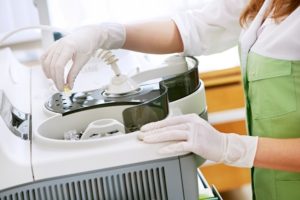 New kits started arriving in March at the lab from Qiagen, a German research company.

These kits were bought because the FBI had expanded the requirements for the testing of DNA profiles.

Back in 2015, the FBI identified errors in the way forensic scientists calculate the chances that DNA found at a crime scene matches a particular person in thousands of cases, the Washington Post reported.

However, lab officials quickly found a serious problem with the new kits. In some cases, they were failing to distinguish between human DNA and that from bacteria and fungus in some cases.

Tim Sliter, a section chief with SWIFS, described the problem as a technical issue. He said the lab sent over DNA testing results of about 30 cases. The anomaly was not found in these instances.

However, in about 50 other cases, the anomaly was found. Sliter said the lab did not report those results to prosecutors.

County lab officials made the DA’s office aware of the issue in the summer. Lab officials are replacing the kits. Media reports stated the lab stopped all DNA testing for cases due to go to trial. Testing was set to resume in September.

“It’s not fatally defective in any of the cases. It’s a slowdown in the administration of justice. The upshot of this is that we cannot rely on any test results from the new kits that came online this year.”

While these errors are alarming, they may have been caught before doing any serious damage. However, the episode raises concerns about faulty technology in forensic science. In the past we have noted how flawed DNA may be leading to wrongful convictions.

Defense attorneys told WFAA prosecutors had been stonewalling them about when DNA testing would be finished or even started in certain cases.

If you have been charged with a crime, you should be aware DNA or any other forensic evidence may be flawed or tainted. An experienced criminal defense attorney can highlight these flaws in the prosecution case. Please call our Fort Worth criminal defense lawyer today for a free consultation.