The new technology is in the testing phase. Eventually, it’s expected to transform the way drunk driving stops are performed in the state.

The system would dramatically curtail the present delays encountered in getting a warrant for a blood test. A police officer in the field would be able to send a DWI blood search warrant directly to a judge. 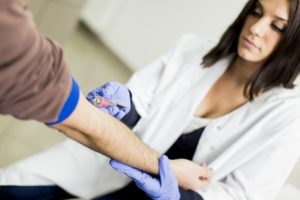 At present, the DWI process can take four to six hours from start to finish, Sgt. Ryan Doyle with the Leander Police Department told KXAN:

“The time from the stop, to the blood draw, is cut down exponentially. We can get a blood draw much closer to the time of driving, and create a much more effective case for court.”

Doyle said merely tracking down a judge to physically sign a search warrant can take at least an hour.

Williamson County lacks a magistrate at the jail around the clock. When Doyle arrests a DWI suspect, he has to drive the suspect to the jail. When no judge is available, he releases the suspect into the jail, and drives to a judge’s house or meets the judge at another place to sign the warrant. The warrant must be obtained before the suspect is taken to a hospital for a blood-alcohol test and the suspect’s reading may have fallen by the time the blood test is taken.

The KXAN report pointed out one section of Leander is in Travis County. When a DWI suspect is apprehended in Travis County, Doyle must drive the suspect to the Travis County Jail before a DWI blood warrant can be signed. The officer often encounters heavy traffic en route to Austin depending on the time of day.

The new software would dramatically change the scenario. The police officer would be able to stay at the DWI stop scene, send an electronic DWI search warrant so as the judge can review it, sign the warrant and return it electronically.

Although police believe the new system would expedite the DWI blood warrant system if the pilot is rolled out, the new method raises some concerns. Under the existing system, a judge and a police officer meet face-to-face, allowing a judge to ask questions to the arresting officer.

An electronic warrant may not warrant the same attention as under the previous system.

Municipal court judges in Leander and Liberty Hill and have been trained on the software, and will be among the first to test it out.

Following the pilot program, the technology should be available for magistrates across Texas.

At the Medlin Law Firm, our Fort Worth attorney offers a comprehensive DUI/DWI defense. Read more about the firm here or call us.