Most killings are committed against people who know each other. In some cases, the perpetrator will seek to hire a contract killer rather than carrying out the crime themselves. A Wichita Falls woman was recently sentenced to 18 years in prison for her role in a failed murder-for-hire plot.

The Dallas Morning News reported Christina June Peyton was sentenced to 18 years in prison. She accepted a plea deal over the failed 2015 murder-for-hire plot against the boyfriend of her daughter.

Peyton, 39, pleaded guilty to murder solicitation an hour before she was to go on trial in Wichita Falls in northern Texas. The Dallas Morning News reported she might have been sentenced to life in prison if convicted.

Her husband Jeffrey Peyton previously pleaded guilty and was sentenced to 21 years in prison for murder solicitation. 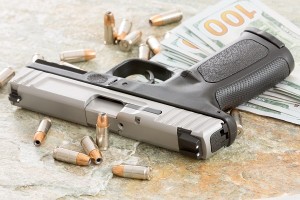 The report said in June 2015, the Peytons approached a witness and offered $300 to kill the boyfriend. The witness reported the details to the police, including tape recordings of conversations he had with the Peytons, according to media reports.

Christina Peyton allegedly told the witness she wanted the boyfriend gone and dead rather than out of town. The couple and the boyfriend were involved in a dispute over money.

An undercover officer later met Jeffrey Bryan Peyton. He posed as a potential hit man. The Times Record reported he told the officer he would pay $300 up front and a further $200 after the hit was completed.

The boyfriend later helped police by posing in a photograph that was intended to look as if he had been shot. However, he wasn’t injured.

The police officer met with Jeffrey Peyton on July 2, 2015. He showed him a picture of the fake death scene and Peyton paid him the remaining $200. He was arrested and his wife was arrested the same day, the Times Record reported.

If you are accused of being part of a murder-for-hire plot, you will be facing a very long prison term. Murder-for-hire is treated as seriously as if you commit the crime yourself.

However, there are shades of gray. People often say they would like someone killed when they are angry without meaning it. However, an arrangement for payment indicates intent.

If you have been charged with an offense of this nature, you should contact our Fort Worth criminal defense lawyer as soon as possible.