Law enforcement officials are required to obtain a warrant before searching a suspect’s personal belongings under the Fourth Amendment.

The warrant must show there was probable to believe the search or seizure will turn up evidence pertinent to a criminal investigation.

Some people think this requirement applies only to physical belongings. However, the protections apply both to physical items like papers and to electronically stored information of the type that can be found on a laptop or a cell phone.

However, the extent to which law enforcement can seize electronic information under a warrant remains a matter of legal dispute.

In 2016, the U.S. District Court for the District of Kansas held that a warrant for an entire email mailbox was not in violation of the parameters of the Fourth Amendment in In re Microsoft Corp.

The court considered an individual’s right to privacy and balanced it against the government’s capability to effectively prosecute suspected criminals. 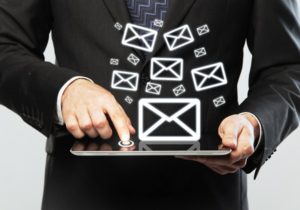 The government wanted to search three email accounts hosted by Microsoft. The accounts were thought to contain details of the criminal activity.

In his analysis, a judge decided the warrant failed to meet the particularity standard set forth by the Fourth Amendment. The descriptions of the place to be searched and the items to be seized by the government were too vague.

The judge denied the warrant and provided suggestions to the government to bring the warrant within the constraints of the Fourth Amendment.

The government submitted an amended affidavit. It asked the court to hold it compliant with the Fourth Amendment and to grant the search warrant to look for evidence of criminality.

Judge Carlos Murguia concluded that email data could be obtained by the government under the Stored Communications Act. The case allowed a whole email account to be seized without the government having to be more specific about the parts of the account it was looking into.

The case appears to grant broad powers to seize electronic information. It suggests the Federal Rules of Criminal Procedure and the Stored Communications Act (SCA) require a provider of email services to turn over the contents of several email accounts.

Another case to go before the U.S. Supreme Court will test the power of the government to seize information.

The case of Microsoft v. USA is set to be heard by the U.S. Supreme Court imminently. The Second Circuit court held that the government cannot compel Internet Service Providers (ISPs) to turn over data stored overseas, even with a warrant.

At issue is whether a judge can demand the US-based software company to directly hand over emails held in another country, in this case Ireland.

If you believe information whether physical or electronic has been improperly seized, please contact our criminal defense lawyers today.