An Arlington sports bar shooting made headlines in May. Two people were shot and killed at Zona Caliente Sports Bar and Grille on South Cooper Street and the killings were reported to be a potential hate crime.

Cesar Perez, the general manager of the Zona Caliente Sports Bar, was reported to be trying to calm gunman, James Jones, when he shot and killed Perez.

A customer at the bar then shot and killed Jones, reported Fox News.

Arlington police later said they were investigating the shooting as a possible hate crime because of comments Jones made when he entered the restaurant. Police also say he had extra ammunition in his car. 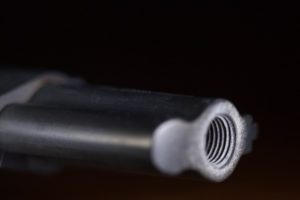 Jones, an Army veteran from 1989 to 1992 entered the restaurant and started shouting what some people considered to be racist comments before he shot Perez dead. She was armed with two knives and a gun.

Police say the 48-year-old gunman entered the restaurant and started shouting what police say people in the restaurant considered racial comments before shooting Perez. He was also armed with two guns and two knives,

Police also alluded to mental health issues that some veterans have faced after returning from combat zones.

“There’s been a crisis in this community from a lot of veterans coming back that have to deal with issues and stuff like that. We’re looking to see if there were any mental health issues going on.”

Police were awaiting the results of toxicology tests to come back to find out if Jones might have been under the influence of any substance, reported Fox.  They said they did not believe he knew Perez, and his family told investigators they knew of no reason why Jones would go to the Zona Caliente Sports Bar and Grille.

Texas has had a hate crimes statute for more than 15 years but convictions are seldom brought under the law, we noted on our blog.

The James Byrd Jr. Hate Crimes Act has been on the statute books since 2001.

The law was named after an African-American man who was killed in a brutal fashion by white supremacists in 1998.

Under the law, prosecutors can attach a sentencing enhancement to alleged hate crime cases, adding additional time in jail if authorities prove the perpetrator intentionally acted out of bias toward a victim’s perceived color, race, disability, religion, ancestry, national origin or age, gender or sexual preference.

However, its’ extremely hard to prove the intent of the accused, and the hate crime element is often dropped later in the prosecution.

If you have been charged with a hate crime, please call our Fort Worth criminal defense lawyers for a free consultation today.