Drug trafficking is an extremely serious crime in Texas and other states. Drug trafficking and distribution is likely to result in a long prison sentence and a heavy fine on conviction.

The amount and type of drug involved will also have an impact on the eventual sentence.

Texas has a Controlled Substances Act. This legislation bans the manufacturing or distributing of prohibited substances with the intent to deliver to another person.

Different penalty groups are set out for different drugs. If, for instance, you are caught in possession of more than 400 grams of heroin or methamphetamine, you will face 15 years to life in prison and a fine of up to $250,000. 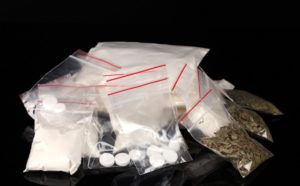 Drug trafficking and distribution is a federal offense

Drug trafficking and distribution is often dealt with in the federal courts. Trafficking essentially means selling or distributing illegal drugs.

If you bring narcotics across the United States border from Mexico to Texas to sell or distribute the drug, it is a federal offense.

Bringing drugs into the United States from another country has very severe penalties. However, it’s also a federal offense to cross state borders with drugs. This crime is also known as interstate trafficking, with the intent to sell. Even trafficking, or moving drugs within a state, can be charged as a federal offense with very tough sanctions.

Federal offenses and punishments can be found in the federal Controlled Substances Act.

These laws were enacted to target drug dealers as well as manufacturers of substances like heroin, methamphetamines, and opiate drugs.

Major federal drug busts often make headlines in Texas. In January 2017, two brothers from Beaumont were convicted in federal court of conspiracy to possess with intent to distribute 280 grams or more of crack cocaine. They faced a prison sentence of 10 years to life.

Given the uncompromising nature of Texas’ drug laws, it’s vital to hire an experienced criminal defense lawyer if you have been charged with a crime of this nature.

As a former assistant district attorney in Tarrant County, Gary Medlin can accurately assess the strength of the case against you and challenge the evidence and how it was obtained.