Man From Texas Accused of Drunkenly Texting 911 Dozens of Times

Our attorneys represent many people accused of drinking and driving. However, in one of the most unusual crimes to make headlines in Texas in recent months, a man has been accused of drunkenly texting 911 dozens of times.

A report in the Star-Telegram noted 46-year-old Shaun Taylor, allegedly began texting the county’s 911 dispatch about 8 p.m. one night in May, saying he was overserved at a bar near his home, according to a Hood County Sheriff’s Department news release.

Dispatchers said they warned Taylor to not abuse the county’s “text to 911” service. However, Taylor kept on sending messages, calling dispatchers and deputies names and demanding that the bar be investigated, the news release stated. 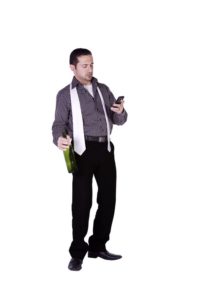 Man is accused of drunk texting

Lt. Johnny Rose of the sheriff’s department said Taylor was warned several times not to abuse the 911 system with messages that were not emergencies. However, instead of stopping he kept on sending messages and calling dispatchers and deputies names. Rose said:

“I guess he got tanked up. There is nothing more amusing than a justice-seeking drunk.”

Sheriff’s deputies picked up Taylor and arrested him at his home in the 5200 block of Buttercup Court, the Star-Telegram reported.

Taylor faces a charge of silent or abusive calls to 911 service, a Class B misdemeanor.

The press release warned against drinking alcohol and texting.

In Texas, a Class B misdemeanor is the second most serious type of misdemeanor detailed in the Texas Penal Code you can be charged with.

A class B misdemeanor is punishable by:

A minor drug offense like the possession of up to two ounces of marijuana is classified as a class B misdemeanor.

While misdemeanors won’t have such dire consequences for your future as felonies, they can still be serious and deny you of your liberty for some time.

If you have been charged with a crime of this nature, please call our Fort Worth criminal defense lawyers today.