A man who was arrested for refusing to give up his rifle when Arlington police tried to take it from him has been found not guilty by a jury in Tarrant County.

A report in the Star-Telegram said 29-year-old LaShadion Anthony Shemwell was charged with disorderly conduct, displaying a weapon in a threatening manner and resisting arrest in June.

He was arrested on a march that was protesting a grand jury’s decision not to bring charges against a police officer who fatally wounded a black teen in Tarrant County. 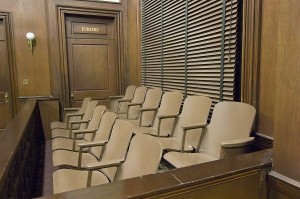 Jury said police should not have taken protester’s rifle

Police shot 19-year-old Christian Taylor when he was caught causing damage to a car dealership in August 2015. He was under the influence of drugs at the time, an autopsy found.

The case against Shemwell raised First Amendment rights issues about what kind of conduct protestors can engage in while they are on matches and demonstrations.

Shemwell was one of two men carrying rifles who arrived at police headquarters on June 10 for the rally and march.

Tarrant County prosecutor Sheena Winkfield told the jury the case had little to do with Taylor or any outrage in the community about the grand jury’s decision not to bring charges against the officer responsible for Taylor’s death.

Winkfield claimed Shemwell and his fellow protesters failed to get the attention they wanted at the police station. They proceeded to Levitt Pavillion, disturbed a concert and terrorized the audience of thousands to get media attention.

The Star-Telegram reported that police asked two men at the rally to “sling,” or attach, their rifles to shoulder straps.

Although one protester complied, Shemwell, refused to sling his rifle. He ended up in a struggle with police officers when they attempted to take the rifle from him. Shemwell was accused of tightening his muscles when other officers tried to handcuff him, according to police.

Defense attorneys pointed out there is no law about how to carry a weapon. Since Jan 1, 2016, Texas has had an open carry law that makes it legal for firearms to be carried in public places as long as the person carrying the weapon holds a license.

While the law is clear, there have still been instances in which people carrying guns have been arrested in Texas. The attack by a sniper that killed five police officers in Dallas in the summer escalated tensions about firearms.

At the Medlin Law Firm, we provide strong representation in weapons cases. Call us today for a consultation at (682) 204-4066.