How Texas Cyclists Can Face Fines Under State and Local Laws

Cyclists sometimes believe they are immune to some of the laws that drivers face in Texas. It can be a shock to Texas cyclists when they are fined for infractions.

It’s important to know the laws as well as your rights against wrongful arrest if you are on two wheels.

Some of the laws Texas cyclists need to follow were detailed in an article on the college publication DailytoReader. 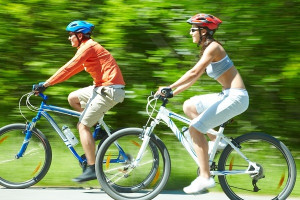 Stacy Stockard, marketing coordinator of the Texas Tech Transportation & Parking Services website, said cyclists ride on public streets and are subject to the same rules as other road users.

They can face fines if they fail to stop at stop lights or signs or yield to pedestrians.

If you are riding a bicycle, you should ride in the direction of the traffic as opposed to against it when there are no cycling lanes. Failure to follow the rules or to ride with lights at night can led to fines of $200 per violation of state law. Bicycles must also be equipped with reflectors.

Texas Department of Transportation states a cyclist who is traveling more slowly than the traffic should “ride as near as practicable to the right curb or edge of the roadway.”

You can face a fine if you carry en extra person on a bicycle unless it’s equipped for two people, or if you pull someone behind you on roller skates or on a skateboard.

The Texas Department of Transportation states a cyclist should not carry an object that prevents him or her having both hands on the handlebar. Cyclists should also use hand signals when they are turning.

Under Texas law, it’s not an offense to ride on the sidewalks, but some cities may have local ordinances prohibiting bicycles on sidewalks. As a rider, you should look out for posted signs.

It’s lawful to park a bicycle on a sidewalk if the bicycle does not impede the “normal and reasonable movement of pedestrian or other traffic on the sidewalk.”

Interestingly, the Texas law that prohibits driving under the influence of alcohol is written so it applies to motor vehicles rather than cyclists.

The fact drunken cycling is not a specific crime in Texas does not mean you will escape charges. Cycling drunk can make you a major danger to yourself and other people who use the road. The chances of causing an accident with another road user or a pedestrian are higher. If you cause a wreck, you will likely face charges.

If a police officer believes you are drunk on a bike you could be tested. You may end up being charged with public intoxication, an offense that carries a fine of $500. Multiple public intoxication charges may lead to incarceration.

The Medlin Law Firm provides an overview of DWI/DUI here on our website. If you need to talk to an experienced Fort Worth drunk driving defense lawyer please call (682) 204-4066.