Fire at Mosque in Victoria, Texas May be a Hate Crime

A fire at a mosque in Texas may be a hate crime at a time of escalating religious tensions.

The mosque in Victoria was set on fire in January. A story in the New York Times quoted investigators as saying the fire was arson. However, no evidence has yet been found to suggest it’s a hate crime at a time when Muslims are the target of legislation.

The Victoria Islamic Center 100 miles south west of Houston was the target of a hate crime several years ago and the scene of a burglary a week before the blaze.

The Associated Press reported the incident came at a time of a rise in hate crimes nationally.

The clerk at a nearby convenience store spotted smoke and flames coming from the Islamic Center of Victoria at around 2 a.m. one night in January. He called the fire department but a massive blaze was underway by the time they arrived. 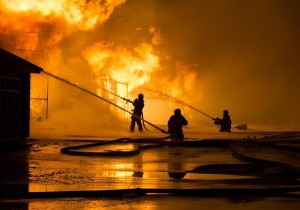 Was mosque fire a hate crime?

The AP report said Victoria Fire Marshal Tom Legler requested assistance from the Texas Fire Marshal’s Office and federal Bureau of Alcohol, Tobacco, Firearms and Explosives in investigating the cause of the fire.

The structure was built in 2000. No injuries were reported. It took about four hours to extinguish the blaze.

Shahid Hashmi, the Islamic center’s president, lived in Victoria for more than three decades. He said the mosque has a congregation of about 140 worshippers. He said:
“When 9/11 happened, Muslims and non-Muslims, we all got together. Of course, we will rebuild.”

Donations were reported to be pouring in. The fire at the mosque occurred less than three weeks after a partly constructed Islamic Center of Lake Travis in Texas also burned down.

Shakeel Rashed, executive board member of the Islamic Center of Lake Travis, told the Texas Tribune the January 7 blaze destroyed the progress made on the building. Muslims in the area were worried, he said.

There was clear evidence linking an attack on the Victoria mosque in 2013 to a hate crime.
The Victoria Advocate reported a man admitted to painting “H8,” on the outside of the building at the time of the previous arson.

The symbol is a computer shorthand for “hate.” The Texas office of the Council on American-Islamic Relations is monitoring investigations into both fires.

If you have been charged with a hate crime in Texas, you should contact our Fort Worth criminal defense lawyer. Read an overview here, or call us at (682) 204-4066.